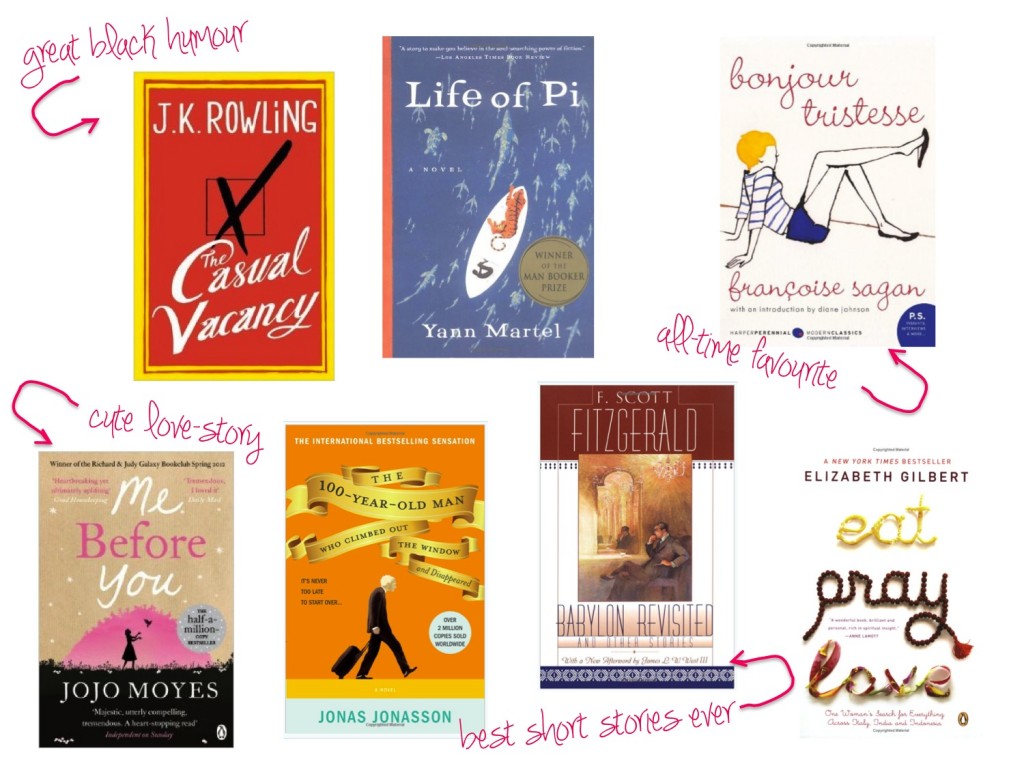 There is nothing as relaxing as reading a good book on a beach on summer holidays. A light breeze, the sound of the waves, a fruity cocktail in the hand… you get the picture. Not to forget the book, yes that paper thing; in this case I am a bit old fashioned since I still can’t get myself to switch to ebooks. Here is a list of my favourites for this summer, from long-loved classics I can read over and over again to great new stories. What’s on your list for the holidays?

Francoise Sagan: Bonjour Tristesse
Endearing, self-absorbed, seventeen-year-old Cécile is the very essence of untroubled amorality. Freed from the stifling constraints of boarding school, she joins her father – a handsome, still-young widower with a wandering eye – for a carefree, two-month summer vacation in a beautiful villa in the south of France with his latest mistress, Elsa. Cécile cherishes the free-spirited moments she and her father share, while plotting her own sexual adventures with a “tall and almost beautiful” law student. But the arrival of her late mother’s best friend, Anne, intrudes upon a young girl’s pleasures. And when a relationship begins to develop between the adults, Cécile and her lover set in motion a plan to keep them apart…with tragic, unexpected consequences.

The internationally beloved story of a precocious teenager’s attempts to understand and control the world around her, Françoise Sagan’s Bonjour Tristesse is a beautifully composed, wonderfully ambiguous celebration of sexual liberation, at once sympathetic and powerfully unsparing.

J.K. Rowling: The Casual Vacancy
When Barry Fairweather dies unexpectedly in his early forties, the little town of Pagford is left in shock. Pagford is, seemingly, an English idyll, with a cobbled market square and an ancient abbey, but what lies behind the pretty facade is a town at war. Rich at war with poor, teenagers at war with their parents, wives at war with their husbands, teachers at war with their pupils… Pagford is not what it first seems. And the empty seat left by Barry on the parish council soon becomes the catalyst for the biggest war the town has yet seen. Who will triumph in an election fraught with passion, duplicity and unexpected revelations?

Yann Martel: Life of Pi
The son of a zookeeper, Pi Patel has an encyclopedic knowledge of animal behavior and a fervent love of stories. When Pi is sixteen, his family emigrates from India to North America aboard a Japanese cargo ship, along with their zoo animals bound for new homes. The ship sinks. Pi finds himself alone in a lifeboat, his only companions a hyena, an orangutan, a wounded zebra, and Richard Parker, a 450-pound Bengal tiger. Soon the tiger has dispatched all but Pi, whose fear, knowledge, and cunning allow him to coexist with Richard Parker for 227 days while lost at sea. When they finally reach the coast of Mexico, Richard Parker flees to the jungle, never to be seen again. The Japanese authorities who interrogate Pi refuse to believe his story and press him to tell them “the truth.” After hours of coercion, Pi tells a second story, a story much less fantastical, much more conventional – but is it more true?

Elisabeth Gilbert: Eat, Pray, Love
A transformational journey through Italy, India, and Bali searching for pleasure and devotion—the massive bestseller from the author of The Signature of All Things

This beautifully written, heartfelt memoir touched a nerve among both readers and reviewers. Elizabeth Gilbert tells how she made the difficult choice to leave behind all the trappings of modern American success (marriage, house in the country, career) and find, instead, what she truly wanted from life. Setting out for a year to study three different aspects of her nature amid three different cultures, Gilbert explored the art of pleasure in Italy and the art of devotion in India, and then a balance between the two on the Indonesian island of Bali. By turns rapturous and rueful, this wise and funny author (whom Booklist calls “Anne Lamott’s hip, yoga- practicing, footloose younger sister”) is poised to garner yet more adoring fans.

F. Scott Fitzgerald: Babylon Revisited & Other Stories
Written between 1920 and 1937, when F. Scott Fitzgerald was at the height of his creative powers, these ten lyric tales represent some of the author’s finest fiction. In them, Fitzgerald creates vivid, timeless characters — a dissatisfied southern belle seeking adventure in the north; the tragic hero of the title story who lost more than money in the stock market; giddy and dissipated young men and women of the interwar period. From the lazy town of Tarleton, Georgia, to the glittering cosmopolitan centers of New York and Paris, Fitzgerald brings the society of the “Lost Generation” to life in these masterfully crafted gems, showcasing the many gifts of one of our most popular writers.

Jonas Jonasson: The 100-Year-Old Man Who Climb Out the Window and Disappeared
It all starts on the one-hundredth birthday of Allan Karlsson. Sitting quietly in his room in an old people’s home, he is waiting for the party he-never-wanted-anyway to begin. The mayor is going to be there. The press is going to be there. But, as it turns out, Allan is not…Slowly but surely Allan climbs out of his bedroom window, into the flowerbed (in his slippers) and makes his getaway. And so begins his picaresque and unlikely journey involving criminals, several murders, a suitcase full of cash, and incompetent police. As his escapades unfold, we learn something of Allan’s earlier life in which – remarkably – he helped to make the atom bomb, became friends with American presidents, Russian tyrants, and Chinese leaders, and was a participant behind the scenes in many key events of the twentieth century.

Already a huge bestseller across Europe, The Hundred-Year-Old Man Who Climbed Out of the Window and Disappeared is a fun, feel-good book for all ages.

Jojo Moyes: Me Before You
A New York Times bestseller—with more than one million copies sold

They had nothing in common until love gave them everything to lose… Louisa Clark is an ordinary girl living an exceedingly ordinary life—steady boyfriend, close family—who has barely been farther afield than their tiny village. She takes a badly needed job working for ex–Master of the Universe Will Traynor, who is wheelchair bound after an accident. Will has always lived a huge life—big deals, extreme sports, worldwide travel—and now he’s pretty sure he cannot live the way he is. Will is acerbic, moody, bossy—but Lou refuses to treat him with kid gloves, and soon his happiness means more to her than she expected. When she learns that Will has shocking plans of his own, she sets out to show him that life is still worth living.

A Love Story for this generation, Me Before You brings to life two people who couldn’t have less in common—a heartbreakingly romantic novel that asks, What do you do when making the person you love happy also means breaking your own heart?

If you enjoyed this article, please consider sharing it!