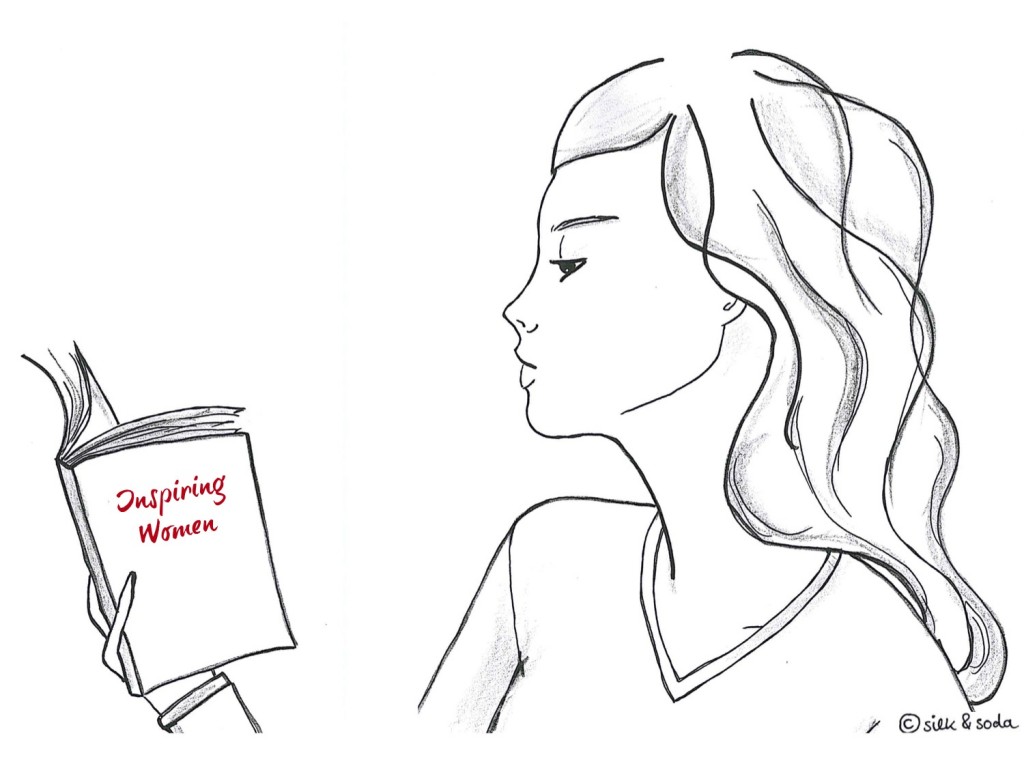 Sometimes it’s hard to be a women… For these moments, every girl needs heroines and role models to look up to. The following books have taken some of the most amazing stories of female power and ingenuity that are sure to inspire you. They tell us about women who made their way in a men’s world with attitude, sensibility, elegance, humour and lots of femininity, and aren’t afraid to be themselves. These stories will make you think, debate and look beyond but also make you grin and nod in agreement. 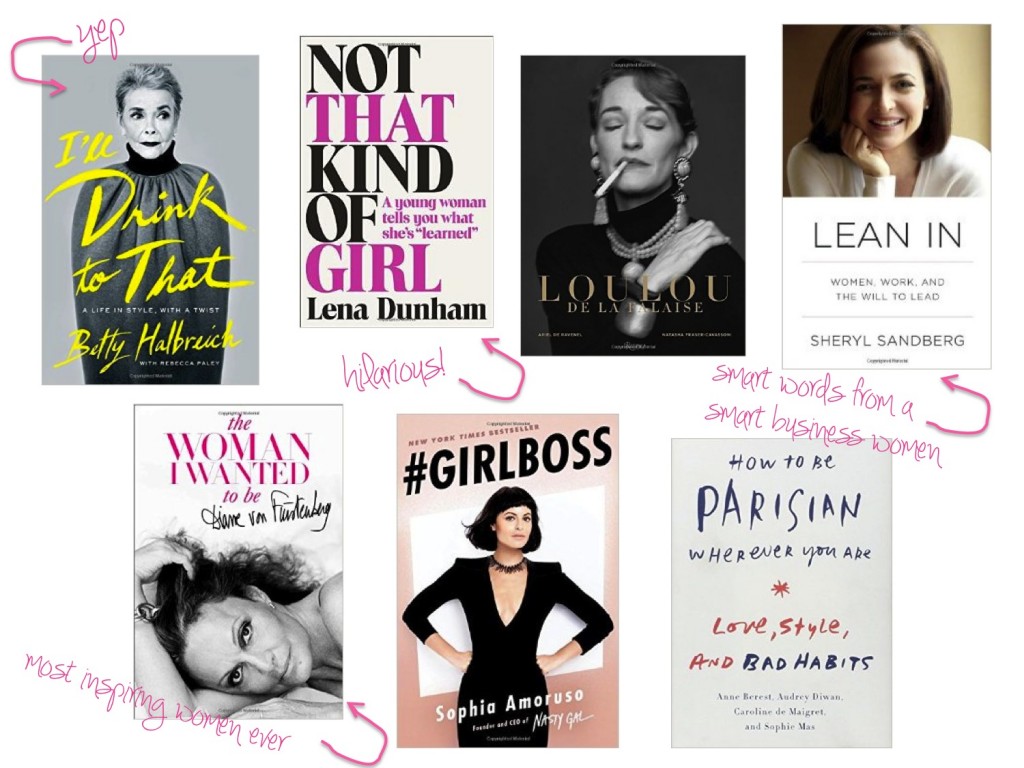 Betty Halbreich: I’ll Drink to That
Eighty-six-year-old Betty Halbreich is a true original, meticulous, impeccable, hardworking, elegant, and—most of all—delightfully funny. She has spent nearly forty years as the legendary personal shopper at Bergdorf Goodman, where she works with socialites, stars, and ordinary women off the street. But Halbreich’s personal transformation from a cosseted young girl to a fearless truth teller is the greatest makeover of her career.

Lena Dunham: Not That Kind of Girl
This hilarious, wise, and fiercely candid collection of personal essays establishes Lena Dunham—the acclaimed creator, producer, and star of HBO’s Girls—as one of the most original young talents writing today.

In Not That Kind of Girl, Dunham illuminates the experiences that are part of making one’s way in the world: falling in love, feeling alone, being ten pounds overweight despite eating only health food, having to prove yourself in a room full of men twice your age, finding true love, and most of all, having the guts to believe that your story is one that deserves to be told. Exuberant, moving, and keenly observed, Not That Kind of Girl is a series of dispatches from the frontlines of the struggle that is growing up.

Ariel de Ravenel: Loulou de la Falaise
Loulou de la Falaise is the first monograph to celebrate the life and work of the style icon and muse to Yves Saint Laurent who became the embodiment of French chic. Renowned for her bohemian chic, daring style as well as for her lightness, nonchalance, and humor, Loulou de la Falaise was not only an influential fashion icon but also a breath of fresh air to the world of Parisian haute couture. This elegant volume is a life in pictures, with over 400 images by legendary contemporary photographers, from Helmut Newton to Bettina Rheims, as well as an essay by Pierre Bergé and interviews with Loulou intimates such as Betty Catroux, Inès de la Fressange, Diane von Furstenberg, Christian Louboutin, Elsa Peretti, Paloma Picasso, André Leon Talley, and Oscar de la Renta.

Sheryl Sandberg: Lean In – Women, Work, and the Will to Lead
Thirty years after women became 50 percent of the college graduates in the United States, men still hold the vast majority of leadership positions in government and industry. In Lean In, Sheryl Sandberg examines why women’s progress in achieving leadership roles has stalled, explains the root causes, and offers compelling, commonsense solutions that can empower women to achieve their full potential.   Sandberg is the chief operating officer of Facebook and is ranked on Fortune’s list of the 50 Most Powerful Women in Business and as one of Time’s 100 Most Influential People in the World .  In Lean In, Sandberg recounts her own decisions, mistakes, and daily struggles to make the right choices for herself, her career, and her family. She provides practical advice on negotiation techniques, mentorship, and building a satisfying career, urging women to set boundaries and to abandon the myth of “having it all.”   Written with both humor and wisdom, Sandberg’s book is an inspiring call to action and a blueprint for individual growth.

Diane von Fürstenberg: The Woman I Wanted to Be
One of the most influential, admired, and innovative women of our time: fashion designer, philanthropist, wife, mother, and grandmother, Diane von Furstenberg offers a book about becoming the woman she wanted to be.

Diane von Furstenberg started out with a suitcase full of jersey dresses and an idea of who she wanted to be—in her words, “the kind of woman who is independent and who doesn’t rely on a man to pay her bills.” She has since become that woman, establishing herself as a global brand and a major force in the fashion industry, all the while raising a family and maintaining “my children are my greatest creation.” In The Woman I Wanted to Be, von Furstenberg reflects on her extraordinary life—from childhood in Brussels to her days as a young, jet-set princess, to creating the dress that came to symbolize independence and power for an entire generation of women. With remarkable honesty and wisdom, von Furstenberg mines the rich territory of what it means to be a woman. She opens up about her family and career, overcoming cancer, building a global brand, and devoting herself to empowering other women, writing, “I want every woman to know that she can be the woman she wants to be.”

Sophia Amoruso: #GIRLBOSS
The first thing Sophia Amoruso sold online wasn’t fashion—it was a stolen book. She spent her teens hitchhiking, committing petty theft, and dumpster diving. By twenty-two, she had resigned herself to employment, but was still broke, directionless, and working a mediocre day job she’d taken for the health insurance. It was there that Sophia decided to start selling vintage clothes on eBay. Eight years later, she is the founder, CEO, and creative director of Nasty Gal, a $100 million plus online fashion retailer with more than 350 employees. Sophia’s never been a typical CEO, or a typical anything, and she’s written #GIRLBOSS for outsiders (and insiders) seeking a unique path to success, even when that path is winding as all hell and lined with naysayers.

As Sophia writes, “I have three pieces of advice I want you to remember: Don’t ever grow up. Don’t become a bore. Don’t let The Man get to you. OK? Cool.  Then let’s do this.”

Caroline de Maigret: How to Be Parisian Wherever You Are – Love, Style, and Bad Habits
From four stunning and accomplished French women – at last – a fresh and spirited take on what it really means to be a Parisienne: how they dress, entertain, have fun and attempt to behave themselves.   In short, frisky sections, these Parisian women give you their very original views on style, beauty, culture, attitude and men. The authors–Anne Berest, Audrey Diwan, Caroline de Maigret, and Sophie Mas – unmarried but attached, with children – have been friends for years.  They will tell you how to be mysterious and sensual, look natural, make your boyfriend jealous, and how they feel about children, weddings and going to the gym. And they will share their address book in Paris for where to go: At the End of the Night, for A Birthday, for a Smart Date, A Hangover, for Vintage Finds and much more.   How to Be Parisian Wherever You Are will make you laugh as you slip into their shoes to become bold and free and tap into your inner cool.

If you enjoyed this article, please consider sharing it!